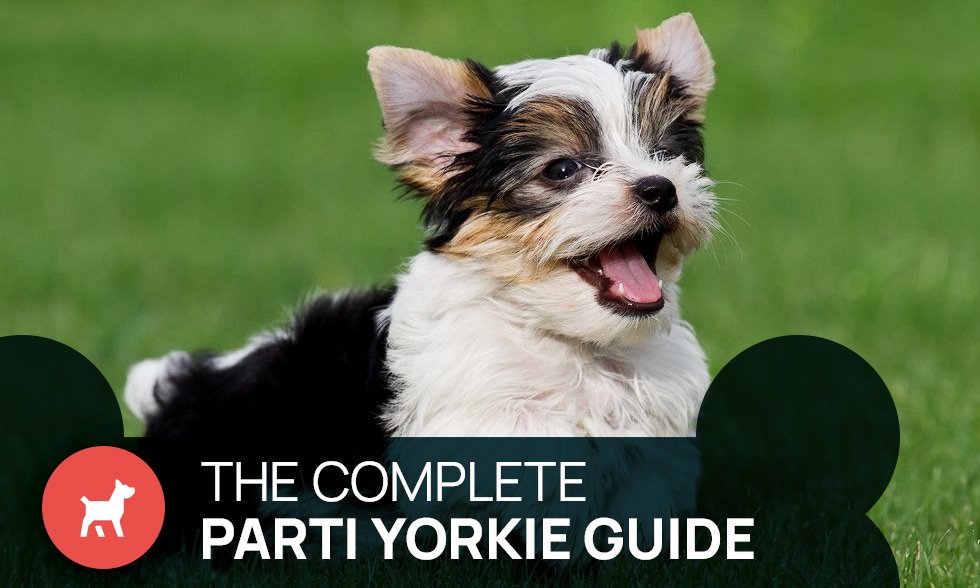 Many people who consider adopting a Yorkshire Terrier eventually come across what is known as the Parti Yorkie. While there are different types of Yorkies, you may be wondering how a Parti Yorkie is different from a standard Yorkie. And, whether or not you should get one.

We’ll start by saying this: Parti Yorkies are excellent dogs that can make the perfect addition to your family. Before adopting any kind of pet, it’s best to learn a bit about the species and the breed before diving in.

That being said, let’s find out what a Parti Yorkie is, how it’s different from a traditional Yorkie, and how you can best care for one.

About the Parti Yorkie

The Parti Yorkie is a purebred Yorkshire Terrier. It’s a widely-known, popular breed that was introduced into North America in the late 1800s and is registered with the American Kennel Club.

The Parti Yorkie had a bit of a rough start in the world of breeding due to its unique coloring. Because its colors were different from the traditional Yorkshire Terrier, many believed it was not worth it.

So, many Parti Yorkies found themselves secretly given away or, in extreme cases, even put down. Even though they were the same as any other Yorkie.

It wasn’t until the late 1980s that a well-known breeder decided to find homes for these puppies rather than having them put down purely for their coloring. After some time, other breeders began to latch onto this cause, and the AKC officially recognized the breed in 2000.

Differences Between the Parti Yorkie vs. The Traditional Yorkie

There truly are not very many differences between the Parti Yorkies and the Traditional Yorkie. But there are enough to make them recognizable. The main difference has to do with the colors of a Parti Yorkie, and we’ll look at that in more detail below.

The most significant difference between a Parti Yorkie and a Traditional Yorkie is the color of their hair.

Purebred, standard Yorkie puppies are born with black and tan coats. As the breed grows, their coats change color and eventually become blue and gold.

While the blue and gold adult coloring is the most common for the standard Yorkie, other colorings include black and gold, blue and tan, and black and tan. All of these colors are accepted by the AKC.

Parti Yorkies break this standard by boasting tri-color coats of black, tan, and white. While these pups are still officially recognized by the AKC as purebreds, their coloring prevents them from official events and competitions.

Although Parti Yorkies have long been recognized as purebred Yorkshire Terriers for decades now. Many people still question the legitimacy of the breed. Because they boast different colors that are hard to come by, some believe they result from crossbreeding with the Maltese.

The stigma placed on these pups is certainly unfair, as lineage and science have proven the white fur is a recessive gene, but since they look different from traditional Yorkies, some folks turn their nose up at them.

About the Parti Yorkie

While some Yorkie enthusiasts prefer the traditional Yorkie and its colorings to the Parti Yorkie, we now know that this breed is just as legitimate as any other purebred. That being said, if you’re looking to adopt a Parti Yorkie, you should learn a little bit about it.

The Parti Yorkie sits alongside the traditional Yorkie as one of the smallest dog breeds in the world. An adult Parti Yorkie weighs between 4 and 7 pounds with a full-grown height of 7 to 8 inches.

As we already mentioned, Parti Yorkies usually have a blend of three colors: white, black, and tan. However, there are also golden and blonde Parti Yorkies who display lighter colors and lack blue or black coloring.

Finally, you may also come across a chocolate Parti Yorkie, which looks like a traditional Yorkie except that it is entirely brown.

You can expect your Parti Yorkie to be very similar to Yorkshire Terriers in terms of personality. Though small in size, this breed tends to be very outspoken, brave, and confident. They are very high-energy puppies with an adventurous spirit, so don’t count them out for their size.

Parti Yorkies make excellent family dogs due to their extreme loyalty. Coupled with their bravery, you may find your pup barking at strangers to protect you. While this can be an admirable trait, it’s important to socialize your Yorkie early on to avoid them getting too attached to you.

Any type of Yorkshire Terrier will be intelligent and affectionate, which makes it easy to train them. They are fast learners who love to listen and receive praise, and they usually get along fine with other pets raised with them.

As far as grooming goes, the Parti Yorkie is fairly high maintenance. While these dogs don’t shed in large quantities, they do shred throughout the year. Most of their shed gets caught in their coats, which is good for your house but can lead to quick tangles and matting.

The most important part of a Parti Yorkie’s grooming routine is brushing. If you keep your dog’s hair long, then you need to brush it every day with a gentle pin brush. A Parti Yorkie with short hair is easier to manage, but you still need to brush it out every few days to keep it mat-free.

Additionally, you also need to bathe your Parti Yorkie more frequently than other breeds. Since it doesn’t have an undercoat, its skin gets dirtier quicker. A bath once per week should do the trick.

Finally, be sure to brush your Yorkie’s teeth regularly. This is a chore that many dog owners tend to skip, but Parti Yorkies are prone to tartar buildup, which can lead to dental disease. In fact, feeding them a good diet also means buying dry food to protect their teeth.