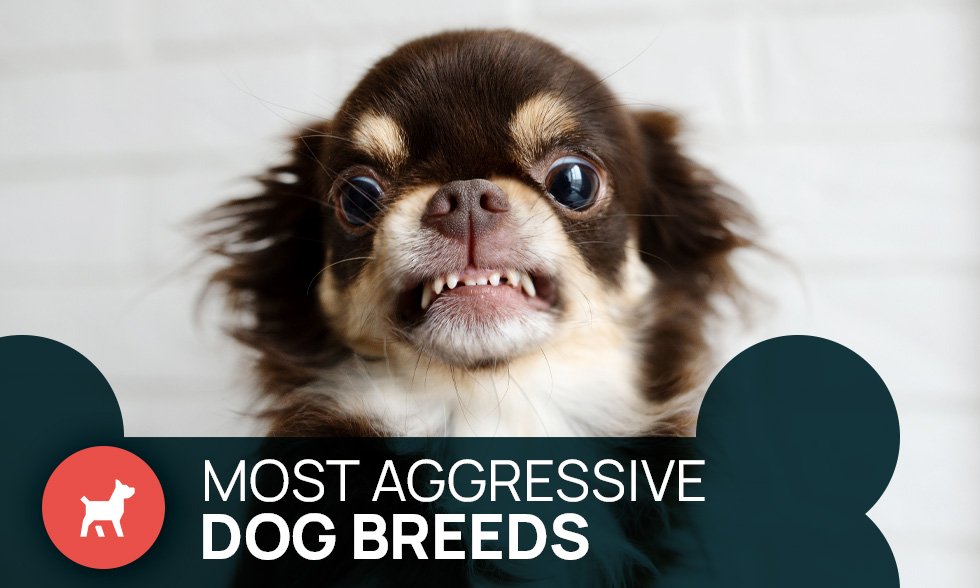 As a dog lover, sometimes it’s easy to get caught up in the cuteness standing in front of you. Especially if you’re on the hunt for a new companion to join the family. It’s important not to judge dogs based on their appearance but know that there are a few labeled as most aggressive dog breeds.

That tiny little fluff-ball might be a lot more ferocious than you think, while that muscle-bound hulk could be the cuddliest pup at the pound.

The fact is that different breeds carry different characteristics and behaviors. It’s crucial that you research your potential best friend before adopting to discern whether these behaviors align with your lifestyle. Some breeds are likely to be more aggressive than others and might not be a good choice if you happen to have small children around, for example.

Dog aggression is generally defined as exerting dangerous behaviors at individuals or other animals. These behaviors can include constant barking, biting, snarling, etc. The reasons for these behaviors can range from territorial defensiveness to fear to social anxiety.

It’s important to note that some of the most aggressive dog breeds can still make wonderful pets if raised and cared for properly. When owners can invest time and effort into disciplinary training that establishes clear rules, these types of dogs can become very peaceful to have around.

Let’s explore some of the most aggressive dog breeds and their behavioral traits. 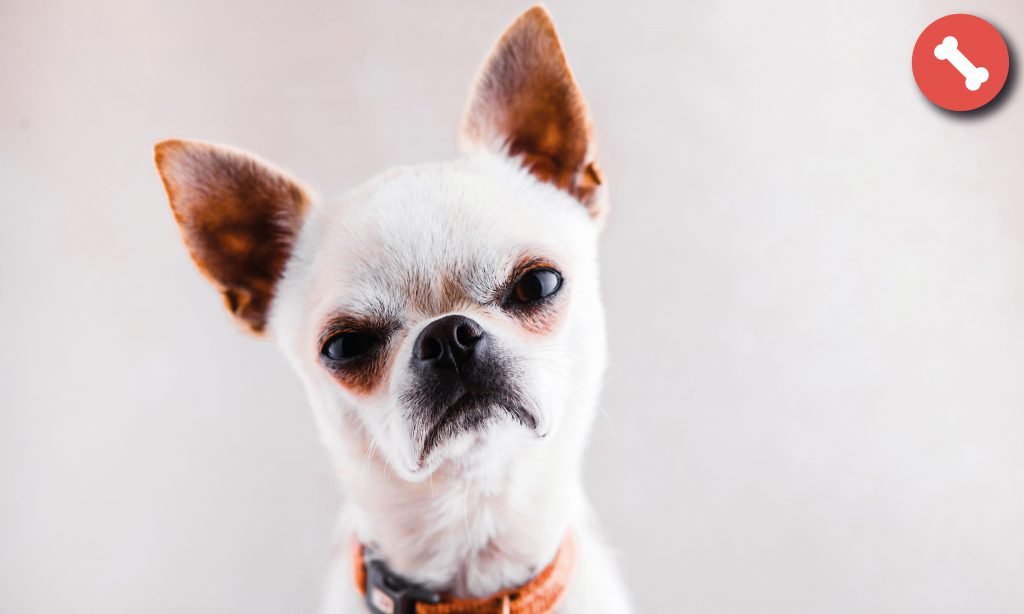 Known as the smallest dog breed in the world, it’s no surprise that people see chihuahuas as “toy dogs.” But Chihuahuas are not as toy-like as they appear. While they may look tiny and docile, they come with an immense amount of ferocity.

Generally ranging from four to six pounds, chihuahuas are comfortable being lapdogs. But, if you neglect to give these dogs boundary and obedience training, they can often become very territorial and aggressive. They exert this behavior as a means of self-preservation in the face of perceived threat.

To be as tiny as a Chihuahua, you’d feel the extra need to assert confidence and stand your ground too! If they think a threat is coming, they won’t hesitate to bite or bark intensely. In fact, these breeds can inflict more bites than any other dog breed.

It’s important to avoid perpetuating the trend of spoiling chihuahuas. As this tends to increase their need to exert their aggression. A chihuahua’s aggression has little to do with genetics, but rather because many small dog owners fail to discipline them early on.

Chow Chows are another unlikely aggressive dog breed. These cuddly pups appear docile but are very unpredictable. In fact, the Chow Chow is one of the most dangerous breeds in the world.

These dogs need a dominant owner who can assert themselves over them. This is particularly important because, unlike many other breeds on this list, Chow Chows often turn on their owners.

Their aggression can usually stem from being under-stimulated, so a good balance of physical activity and socialization is essential.

Because of a Chow Chow’s assertiveness and dominance, they are never recommended for first-time dog owners. They need strong guidance and firm discipline. They also don’t have good peripheral vision. This causes them to get startled easily and triggers their aggressive behavior.

Unlike our last two unsuspecting breeds, the Doberman Pinscher’s aggressive nature might come as no surprise. These dogs were initially frightening guard dogs and are among the most aggressive breeds.

Karl Louis Doberman first bred these pups to keep himself protected while traveling to dangerous places as a tax collector. As such, these dogs are quite intelligent with solid and protective instincts. They are often used as guard dogs and police dogs.

Dobermans are more loyal than violent, only exerting their aggression as a means to protect their loved ones. If a Doberman experiences consistent socializing and disciplinary training, they shouldn’t present aggression any more than most dogs do. They usually get along great with children and other animals.

German Shepherds are a popular dog breed among families as well as militaries and police forces. This is due to the fact that these pups are intelligent, loyal, and easier to train.

Should a German Shepherd feel that they or their owners are being threatened, they will react aggressively in defense, making them great at being guard dogs.

Without regular socialization, these canines can become very territorial towards people or other dogs. They also need regular exercise to release any pent-up energy that might lead to their aggressive behaviors.

While Siberian Huskies have a generally sweet and cuddly exterior, they can become dangerous canines.

Huskies have incredible athletic stamina, particularly during Alaskan sled racing. This high supply of energy requires continuous physical activity and mental stimulation. This is due to their level of intelligence. Neglecting to do so will result in aggressive and unpredictable behavior, especially towards other animals. If you have other small pets, you’ll need to keep a watchful eye on this breed.

Socialization and disciplinary training are important during a Husky’s early stages of growth. This is so they can discern the difference between safe and threatening situations.

Much like its namesake, Wolfdogs have a wolf-like prey drive that enhances their violent capabilities. These dogs must work through their built-up energy through physical activity to avoid aggressive and fatal behaviors.

For Wolfdogs, their physical activity should consist of a simulated “hunting” experience. A most aggressive dog breed study shows that many dogs in this breed can still show wild characteristics of their ancestors. As seen through their unpredictability.

First-time owners should avoid adopting Wolfdogs as they need a stern, assertive and experienced handler.

Bull Terriers are powerful canines and are often referred to as pit bulls. Despite their unbecoming reputation, these pups are very loyal companions who can be very loving towards their owners. Their affectionate and playful nature can make them one of the best dogs for children. But only if boundaries are established early on.

Bull Terriers’ tenacious characteristics have led them to be bred as fighting dogs. But typically only the dogs bred this way tend towards aggressive behavior. If they are not pushed to fight and are given a loving environment full of physical activity, these dogs can be very kind and friendly.

Some Pitbulls get rescued from fighting rings and are then rehabilitated to more of a docile, affectionate nature. Although, it should be noted that not all the rescues can forget their aggressive training.

Boxers get their name from their tendency to use their front paws to “box” playfully. But don’t let your guard down; these pups are still considered one of the most aggressive breeds. So much so that many home insurance companies will refuse to insure you if you own a Boxer dog.

These tenacious pups are generally full of energy and have been known to cause fatalities. One bite from a boxer can cause some serious damage. This might be due to their initial breeding as hunting and guard dogs during World War II.

This protective breed will do fine with disciplinary training and frequent exercise.

A beautiful all-white dog, the Dogo Argentino can often be a ferocious and powerful canine. They are skillful hunters bred for this purpose. They can prey upon the game as big as wild boars. But even with these superb hunting capabilities, Dogo Argentinos are not typically aggressive with loving and assertive owners.

However, their reputation precedes them. So much that Argentinos are a breed banned from the UK due to these unbecoming perceptions. Still, like many of the other breeds on our list, with proper training, established boundaries, and lots of love, Dogo Argentinos can be wonderful companions.

Akita’s are a very dominant and independent dog breed. They can become very aggressive without disciplinary action and need a skilled and experienced handler to train them. They often exert their dominance on other dogs of the same sex to establish their territory. For this reason, it’s not a good idea for two Akitas of the same sex to share a household.

But, these pups are among the best dogs for children and can be quite affectionate and playful under the proper training. Still, you should avoid leaving your small children alone with this dog breed, or any on this list, for that matter.

While some dog breeds can seem more frightening than others. It is inadequate training, lack of socialization, and avoiding setting boundaries that perpetuate aggressive behaviors in dogs. A well-structured and balanced lifestyle that includes disciplinary guidance, consistent physical activity, and lots of love will keep even the most aggressive dog breeds compliant, happy, and affectionate.

Some good strategies for taming these dog breeds and their temperamental behaviors include playtime with heavy-duty dog toys, offering them CBD products for dogs, or as a last resort, intermittently using training collars.