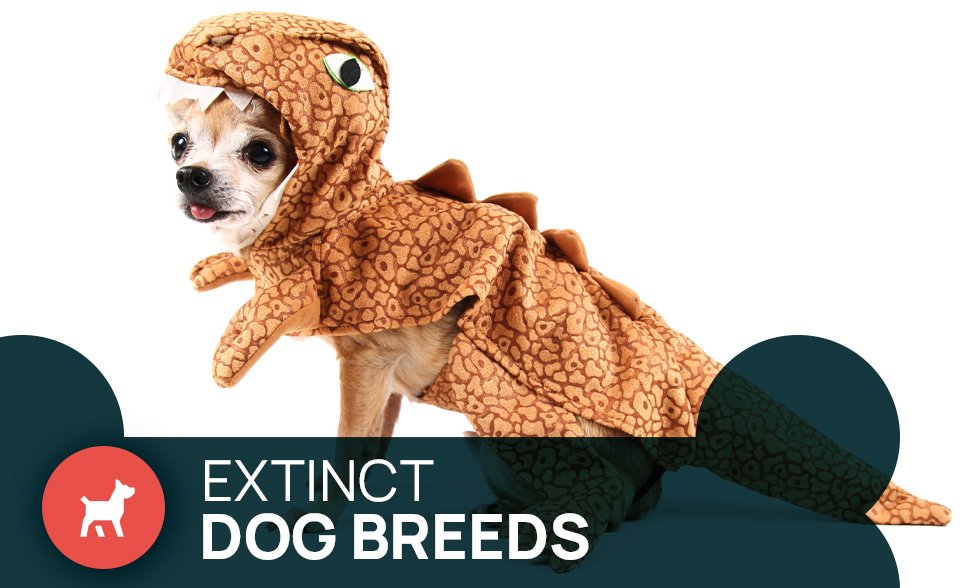 When you come across a list of extinct animals, you often see quite exotic animals like the dodo bird or the saber-toothed tiger. But did you know there’s a whole lot of extinct dog breeds that no longer walk this earth?

It’s hard to believe how that’s even possible; I mean, we all love our pups like family, right? However, over time, some breeds have come to an end. We can no longer adopt these breeds. But many of them have played crucial roles in molding the breeds we know and love today.

Below are just a few of the many dog breeds that once existed but have disappeared into history forever.

Though long extinct, the Talbot has the distinct honor of being one of the oldest scent hounds from Europe with roots dating back to 1400 CE. While you may have never heard of this particular breed, there’s a substantial chance you’ve heard of some of its descendants – the Beagle, Basset Hound, and Bloodhound.

The Talbot breed may not be around anymore, but pet owners and hunters alike are still benefiting from its reign. This well-known hunting dog was highly respected for its natural abilities, which it has passed along to its successful family members today.

Hawaii Poi Dogs were a breed that featured an appearance similar to today’s Corgis. These pups sported a wide range of colors, perky and pointed ears, and long tails.

The Hawaiian people looked to these dogs as spiritual protectors of children and were descendants of Polynesian dogs brought to the lush islands.

Today, many Hawaiian natives still refer to mixed breeds as Poi Dogs, though the original breed is now extinct. Perhaps it’s a sign of respect for the dog, which roamed the island before it even became a US state.

The Turnspit Dog has been mentioned as far back as the 1500s, being described as a pup with short legs, a long body, and a curly tail. These dogs were tasked with quite the odd job, running on a wheel which turned meat; hence their name, Turnspit.

These thick, stocky dogs had coats in a variety of colors and were known to be incredibly hard workers. As hard as they worked, most people described them as particularly ugly.

Of course, as dog lovers today, we know that all dogs are beautiful in their own way! Some experts believe this breed lives on through the Bowsy Terrier.

As you probably already guessed from this hound’s name, this British breed likely interbred to create the modern-day Beagle. It’s challenging to pinpoint this dog’s exact extinction, but it’s estimated that the breed disappeared sometime in the 1800s.

The North Country Beagle usually only appears in early writings to distinguish the Southern Hound, so there’s not a lot of information about the breed. However, its appearance is easily comparable to the Beagle we know and love today.

The Alpine Mastiff was a British breed known for its extremely large size. This should come as no surprise considering the size of modern-day Mastiff breeds, but in the 1800s, its size was something to gawk at.

This dog breed dates back to even earlier than 500 BC and originated in northern Europe. The massive pups are thought to have gone extinct due to excessive crossbreeding. At the time, it was popular to breed it with other large mountain dogs to create several giant breeds.

Unfortunately, conservation efforts weren’t more focused back then, and today we miss out on the Alpine Mastiffs’ friendly, calm, and gentle temperament.

Considering the immense popularity of the breed between the 16th and 19th centuries, it’s hard to imagine how the English Water Spaniel became extinct.

However, when we look at the long list of descendants (English Springer Spaniel, American Water Spaniel, English Cocker Spaniel, Field Spaniel, etc.), it’s easy to see how this once novel dog quickly became lost in the shadows.

Emulating traits shared with the Poodle, Collie, and Spaniel, the English Water Spaniel was a beautiful dog with curly hair and a combination of blacks, browns, and whites in color.

The Paisley Terrier was quite the adorable little pup, and it’s a shame we don’t have the breed around today. Covered in long, silky hair, the breed that most resembles this dog today is its relative, the Yorkshire Terrier.

Due to their unique style of fur, this Terrier breed was most often used for companionship and shows.

Unfortunately for this breed, the Yorkies became so popular that the Paisley breed simply died out. The breed didn’t have a long lifespan so it was difficult to sustain their bloodline once their popularity dropped off.

Another Terrier enters the list of extinct dog breeds: the White English Terrier. The story goes that the breeders interested in this particular dog got a little too anxious to create new breeds, which ultimately led to the extinction of this beautiful pup with strong, sharp features.

While the all-white, sleek breed went on to create popular dogs such as Jack Russell Terriers and Fox Terriers, it was also known for some hefty genetic issues that contributed to its drop in popularity.

However, the undeniable fox-like features of this breed continue to live on in many other dog breeds that boast similar physical attributes.

Unfortunately, there’s nothing we can do about the extinct dog breeds. While we can certainly mourn the fact that we won’t be able to enjoy their fun-loving spirits. We can take steps to ensure our beloved breeds today are here to stay!

Part of keeping current breeds strong and thriving is feeding them a good diet. It’s great to know what they should be eating, but you should also know which foods your dog can’t eat. Be sure to check out our list of foods that your pup cannot eat.