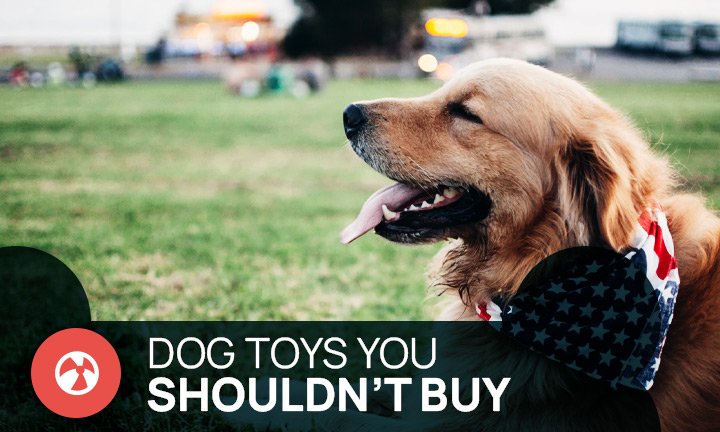 There is a worldwide misconception that your dog’s teeth are indestructible. And that chewing on anything they can sink their teeth into is good. Though they do have the ability to chew on their favorite toys, there are a handful of dog toys you shouldn’t buy your dog.

These toys are in fact so bad for your dog’s teeth and digestive system that they’re red-flagged by vets. Whether dog owners want to ignore these red flags is a different story.

Dangerous Dog Toys you Need to Throw Out

There is a myriad of dog accessories that have permeated the pet culture regarded as safe and fun. Everything from bones to sticks and even pig ears seem to be popular dog toys. But these items, though entertaining to watch them gnaw at, pose serious threats.

As long as pop culture has existed, dogs have chewed bones. This has led to dog lovers bringing home leftovers for their dogs to eat, as a “reward”.

But bones are of no nutritional value to our pups and the chances of them choking are high.

There are forums that advocate dogs chewing bones as safe and cite wild dogs and wolves as examples of this.

Do you think if wild dogs ate as well as our pups, they’d put themselves through the trouble of eating bones? Probably not.

The juice isn’t worth the squeeze, folks. Avoid yourself a potential headache or an incredible high vet bill.

These are the second weirdest dog toys I have ever seen and here’s why. Elk and deer use these things to fight each other and we’re using them as chew toys for our pets.

I’ve seen documentaries where elk and deer attack each other to impose dominance and use their antlers to try and stab each other. Yet here these things are, sitting in our living rooms.

Though antlers are natural and each one has a sick, gruesome story behind it, they are more than capable of breaking your dog’s teeth. Not to mention they’re also sharp enough to puncture their mouth and or internal organs if swallowed.

Toys that squeak, trigger my OCD. To the extent of not blaming our dogs for ripping them apart. But apart from this type of toy not lasting very long, they also pose serious threats to your pet’s safety.

The small plastic devices inside them that make them squeak are made of small pieces that can be choked on. You can watch them play with them all you like but are you prepared for 100% surveillance to make sure they don’t get hurt? Only you can answer that.

Dogs are hairy children so preventing them from putting things in their mouth and swallowing, is an ongoing battle.

Stuffed animals (especially those that contain Poly-Fil type stuffing) are dangerous dog toys you shouldn’t buy your dog. This is because, in a matter of days, your dog will reduce this toy to hundreds of bite-sized pieces.

Those who are lucky enough to be able to swallow the pieces can face issues such as an intestinal blockage or a complete stop of their digestive process. If this isn’t treated quickly enough can lead to death.

Toys with Bells for Dogs

When I was 8 years old, I used a kitchen knife to break open an annoying little toy that my younger brother had to see what was inside. It was a round ball about the size of a strawberry and by throwing it away I saved my dog’s life.

This type of toy is wrong on so many levels but to make a long story short, save yourself thousands of dollars in vet fees.

This is an interesting one that I wasn’t made aware of until very recently. Like some humans are allergic to latex, some dogs can be too.

I’m not saying don’t buy these toys for them even if they’re not allergic but keep an eye out for allergic reactions such as rashes and or sudden hair loss. The latter is a bit extreme but can happen in some cases.

Dogs love gifting their human with random things they find on any given trip to the park. If it’s not a dead bird or owl pellets, the next best thing is sticks.

While I can never say no to a free t-shirt or cup holder, I usually have to deny my dog the opportunity of bringing a stick indoors.

Sticks are often fragile and end up in dozens of little pieces that can each puncture the insides of your dog.

It’s tempting to play fetch using this inanimate object but in the next few sections, we’ll cover a few cheap and better alternatives.

Tennis balls are fantastic toys for small to medium-sized dogs as they are inexpensive, and great for fetching. But if your pup happens to be a dog bigger than a labrador, these are dog toys you shouldn’t buy your dog.

Tennis balls are swallowable by larger dogs and very few actually live to tell the story. Not trying to scare you but tennis balls aren’t only dangerous for Clifford the big red dog. An adult German shepherd or golden retriever can also suffer the consequences.

How do I know if a Toy is Safe for my Dog?

If after reading this article you feel that everything is dangerous, I hope you don’t watch a few Netflix specials on the fast-food industry.

But not to fear, because sticks and deer antlers are no longer ok, doesn’t mean you’ll have to teach your dog to read.

We’ve put together a handful of our favorite dog toys that your dogs will love. These are safe alternatives to having them play with dried-up pig ears and cow hooves.