15 easy commands to train your pup 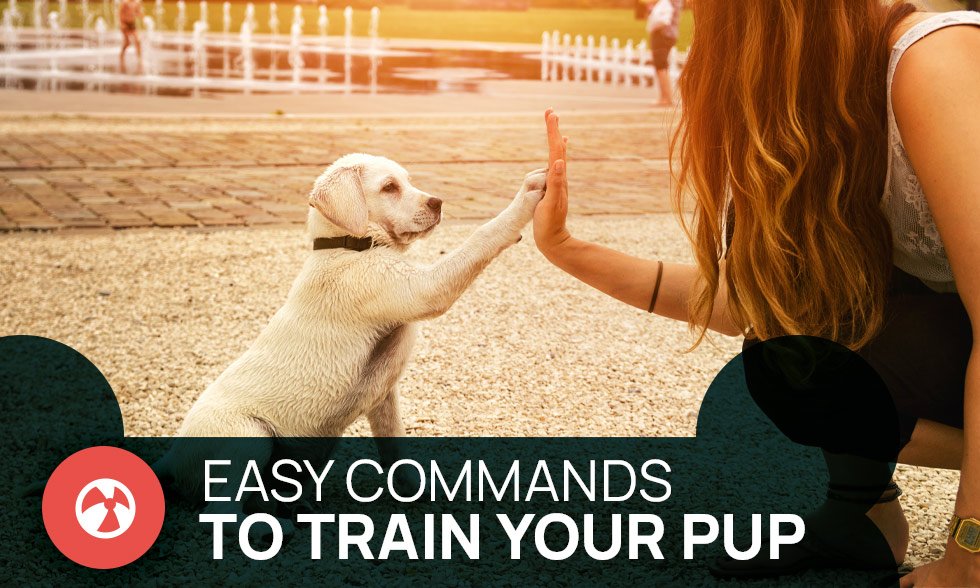 Most of these easy commands to train a dog involve reinforcing behaviors with treats. You can use almost any food for this, but be sure to avoid foods dogs can’t eat. Those can harm your puppy’s health and ruin the training.

Come is always a helpful command. It’s one of the first things you should teach them because it can encourage them to return to you instead of rushing into a dangerous area. To teach this command, leash your puppy and speak the command while you tug the leash towards you. Reward them when they comply.

Teaching this command usually takes several days, so don’t get frustrated if they don’t pick it up right away. Make sure you teach it thoroughly enough that they’ll obey the first time in the future.

Sit may be the most famous command in any book on how to train a puppy, but that’s because it’s so fundamental and useful for managing their behavior. Teaching your dog to sit on command can stop them from moving, help calm them down when they’re overly excited, and even help prevent trouble.

To teach this command, hold a treat in your hand and put it over their head. Slowly move the treat behind their head, repeating it until they crouch down. When they do, say the command and give them their reward.

Down is another good command when looking to learn how to train a puppy. Although superficially similar to sit, it involves putting their whole body on the ground instead of just their rear half. This is particularly useful when your puppy is overly excited and jumping around. As a bonus, it’s similar to ducking and can help them avoid knee-level hazards that might be moving through the area.

For this command, hold a treat with a strong smell and wait until they notice it. Move the goodie down to the floor. Your dog should eventually follow. When your puppy’s belly is entirely on the ground, say the command and give them the treat. Repeat as necessary until your dog consistently obeys the command the first time they hear it.

Wait is another command that’s similar to sit, which shows how fundamental and helpful that command is. However, the main difference is that wait is specifically for when other people are approaching the area, such as when visitors are coming into your home. This helps ensure your dog won’t simply jump on every visitor that enters your home.

As a bonus, this command discourages them from making too much fuss when they notice someone approaching.

To teach this, have one person go outside while the other stays inside with the dog. When your dog starts moving towards the opening door, the person inside should speak the command while the person outside closes the door. Reward the puppy when they don’t move towards the door.

This command is useful mainly for busy areas where dogs can get distracted, such as public parks. Stimuli like squirrels, cars, and other dogs can be quite distracting, so training your puppy to focus on you and ignore other things can help stop many problems before they begin.

To teach this command, hold a treat and put it near your dog’s nose so they can smell it. Slowly move the treat before your face, stopping when the treat is centered by your nose. Speak the command and reward your pup if they paid attention the entire time.

This command can be challenging to teach because dogs are prone to looking at things that get their attention, so you may need to repeat it more than other commands.

This is one of the most versatile commands because it teaches self-control, and that’s fundamental to most of the other puppy commands on this list. Use this command anytime you see your pup starting to get into trouble.

To teach it, put your dog on a leash and place a treat on the floor a little ways away. Move your dog towards the treat, making sure they can’t suddenly reach out and grab it. When they start sniffing it, say no and pull the leash towards you. If they obey, reward them.

Repeat this training frequently. Like watch me, no requires dogs to overcome their instincts, so it takes more time and effort to teach.

Like sit, stay is one of the most fundamental and helpful commands when learning how to train a puppy. It pairs with come, which we went over earlier. This is primarily a safety command because it teaches your dog to hold in place instead of going after whatever they’re currently focusing on. That can protect them from threats, and it can also protect others from them if they’re prone to biting.

Some commands are teachable later in life, but this is particularly important to teach when they’re still young. Begin by having your puppy sit, preferably with the first command on this list. If they move towards you, use the no command and have them sit again. Speak the new command when they remain in place, then reward them and use come.

Drop is a great command to teach when deciding how to train a puppy because it focuses on their mouths, which is how they carry most items. It’s also helpful for protecting valuable items in your house. To teach this one, you’ll need two identical toys. Make sure to avoid any dangerous toys here. Like bad treats, poor toys can ruin training.

To teach this command, give your puppy one toy and let them play with it for a while. After a bit, call them over and hold up the copy of the first toy, then repeat the command. Give them the newer toy after they drop the first one, and consider giving a treat at the same time.

Reinforce this command regularly. Like other safety-oriented commands, making sure they obey this the first time can be useful.

Most people don’t want their dogs to be too loud, but there is one exception: when you need to find them. Teaching a dog to make noise on command is almost as helpful as teaching them to be quiet.

Watch your dog, and say the command loudly right before they’re going to bark. Use the same tone as your other commands, and give the occasional treat to reward the behavior. Make sure they don’t associate random barking with your command.

Take is the opposite of drop, and while it doesn’t see as much use, it’s still a fun trick that can get them to hold items on command. Teaching it is simple. All you need to do is hold up a toy and speak the command, then give them a treat after they take the item. Make sure to teach them the drop command before this one.

Off is a good command for teaching your puppy short movements. It’s also a courteous command to teach so you can get your dog off of other people’s furniture. For this command, hold a treat and put it in front of your dog’s nose. Keep holding it while they try to get the goodie, but only speak the command and give them the treat once they back down.

Try to teach this somewhere near furniture to help form the association.

Leave it is a command you can use on walks or while outside. Puppies love investigating things, from animals to what’s left after you potty trained them, so teaching them to refocus their attention always comes in handy. To instruct them on this command, hold one treat in each hand. Show your dog one, then close your hand, while keeping your other hand behind your back.

Keep the treat you showed them in your fist, speaking the command repeatedly, and give them the other goodie once they back away from the original.

Heel is another command that’s useful for walks. Dogs learn most of their walk habits as puppies, so teaching this early is key to success. While on walks, have your dog sit occasionally. Keeping the leash tight, show a treat, and move it over their head. Repeat the command several times, then give them the treat.

Dogs will sometimes get tangled up in their leash, so this is a great way to teach them how to undo it. Wrap the leash around their front paw, then slowly increase the size of the loop while pulling it towards you. Your dog should lift their paw and let the leash come off. Give them a treat and speak the command loudly.

Finally, at the end of the day, it’s time to go to bed. The key here is to make sure they see it as a positive, rewarding activity, and not a punishment. Keep your dog on a leash and lead them to their designated bed. Once they’re in it, speak the command and give them a treat.